What springs to mind when you think of Kemi, a coastal city in the northern hemisphere? You probably know there is a SnowCastle that draws visitors to our city especially during wintertime. You may also know that during summer months our Inner harbour invites everyone to join in some action-packed water sports or relax by the sea while sipping refreshments in the many summer restaurants along the marina boulevard.

Now, let’s take a moment, and look a bit deeper. Or, actually, let’s look better. There is a lot to appreciate in our city once it is revealed in more detail. So, why don’t you join us in a city tour and let us show you how much more there is to Kemi? Soon you’ll be discovering there is plenty to see regardless of the season. So, let’s go! 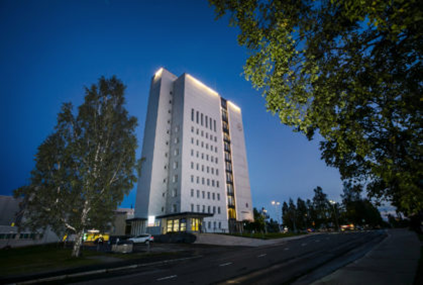 The Kemi city hall is a skyscraper-like tall white building. The original building, in the style of functionalism, was built in 1940 and designed by architect Bertel Strömmer. This building is famous for its resilience as it survived, with minor damage, the 1944 bombing attempt. In 1960’s the city hall was underwent an extensive expansion, which altered its façade. On the 9th floor there are still three large water tanks retaining the original usage of architect Strömmer’s plan for a city hall combined with water tower.

Crossing the street, we’ll find Sauvotalo next door to the city hall. Built in 1955 this building was designed as a community hall and derives its name from the Sauvosaari district where it is located. The house has since experienced many different uses. In 1963 it was the centre for a substantial trade fair where President Urho Kekkonen also found many interesting stands. Currently, the building is awaiting its new era and new occupants.

Walking towards the railway station within sight on the Meripuistokatu side we will find a charming park area with original buildings. The actual railway reached Kemi in 1902 and the main station by architect Bruno Granholm was built a year later. Next door there is a 1932 built station restaurant that still provides a historical setting for the current café establishment. Kemi’s yesteryears can be glimpsed when pausing in the railway park area. 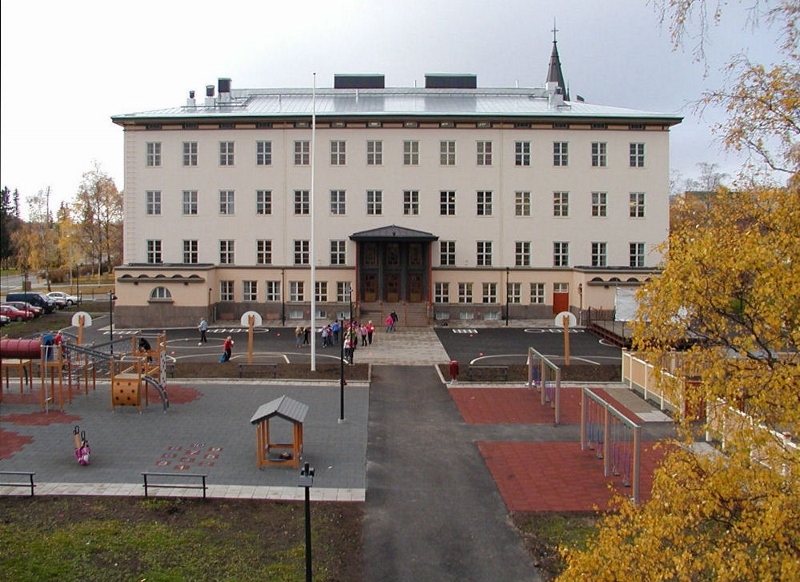 Let’s walk back to the Meripuistokatu (literally: sea park street) and carry towards the Inner Harbour. In summer one can stroll the birch lined boulevard cutting through the street all the way from the city hall to the marina. Soon, we come by a school building called Sauvosaari School. It was originally known as Kansakoulu (a public elementary school), and this is still indicated with large letters at the back of the building. The schoolwork started the same year as the building was erected in 1936. It was designed by the architect of the national school board, Toivo Salervo who also designed two other school buildings in Kemi in 1920-1930’s. The nicely restored Sauvosaari School has a large playground where plays and games can be enjoyed even during summer months when the school year is out.

While still observing the school building, we cannot avoid the sight of an imposing Lutheran church next to it. The church was built between 1900-1902 and has been restored back to its original colouring. This Neo-gothic building was designed by architect Josef Stenbäck. The position of the church entrance gives name to the whole street, Kirkkopuistokatu (lit: church park street.) During wintertime the church doors are open during Sunday mass and various musical events, but in summer one can visit also during weekdays.

A few steps towards the marina there is another building for education, the Kemi Lyceum High School. Built in 1930 the school offers study programmes both for the daytime students as well as those attending evening classes.

Walking along the Meripuistokatu we soon reach an impressive statue of male Capercaillie, or Eurasian grouse. This large-scale acid steel statue by Aimo Taleva stands on a concrete pedestal having an unobstructed view of the Bothnia Bay. This statue is but one of the almost one hundred statues or memorials in Kemi. You can find more information on this publicly displayed art of Kemi, should you wish to take a closer look at them.  Or, perhaps more conveniently, why don’t you download Kemi Card, and have an easy access to all kinds of information on Kemi. 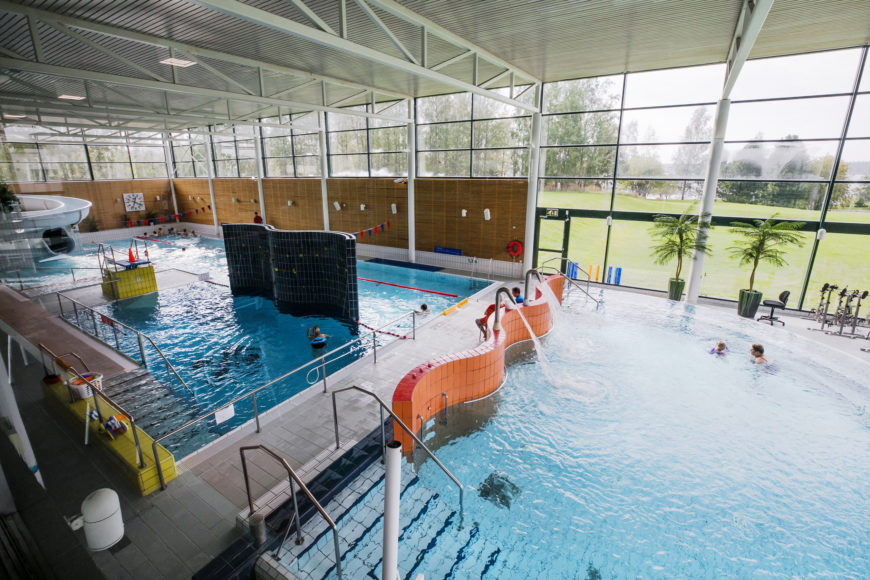 But for now, we move on, passing the Capercaillie and coming to the Kemi swimming hall. This 1967 building designed by Arne Ervin hides inside a great setting for swimming. The indoor pools offer a splendid view across a park to the sea. So, perhaps a dip into the water might refresh before we carry on our walking tour? The swimming hall is open year a round, excepting July when the sea is the scene water activities. 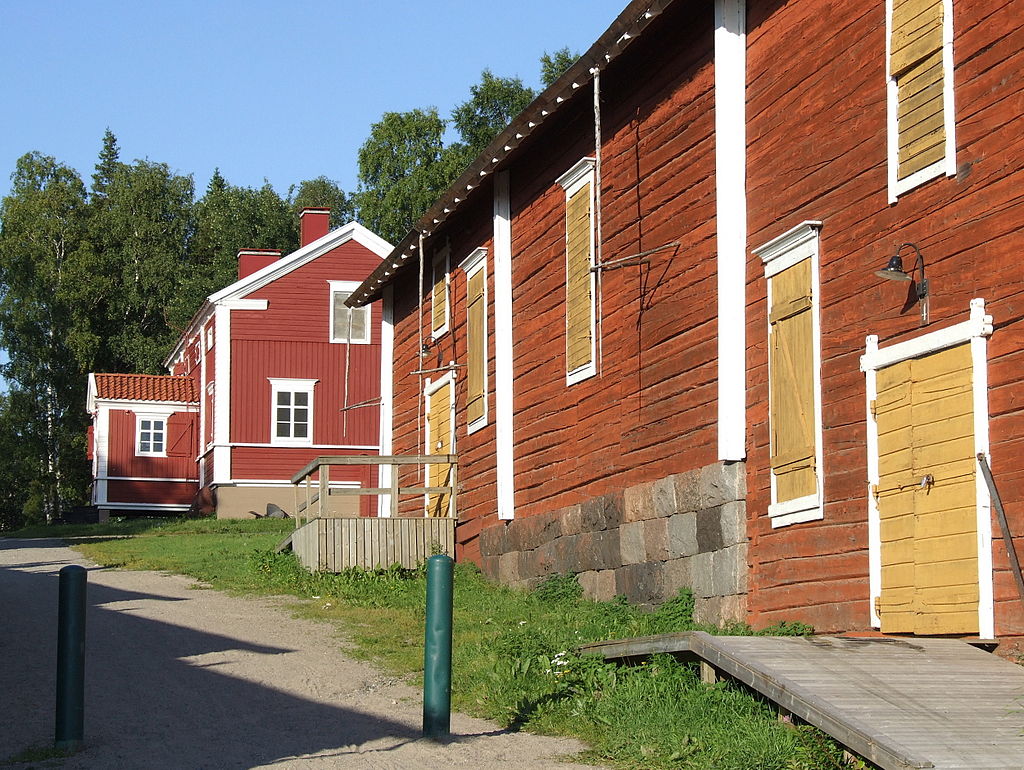 And, so we find ourselves by marina area, Kemi Inner Harbour. Turning right we notice some log warehouses are still providing traditional settings where to enjoy refreshments. Situated on the boulevard is an attractive yellow building. It was built in 1912 as a customs office and warehouse, and is in fact the second customs building in Kemi where the customs operations begun in 1873, only four years after the city was established. The building functioned until 1985 in its original capacity. Since then, it has been occupied by the Kemi Gemstone Gallery and the Cartoon Centre. The architecture of the building is a representation of a simple classism predominant in the Scandinavia before functionalism. 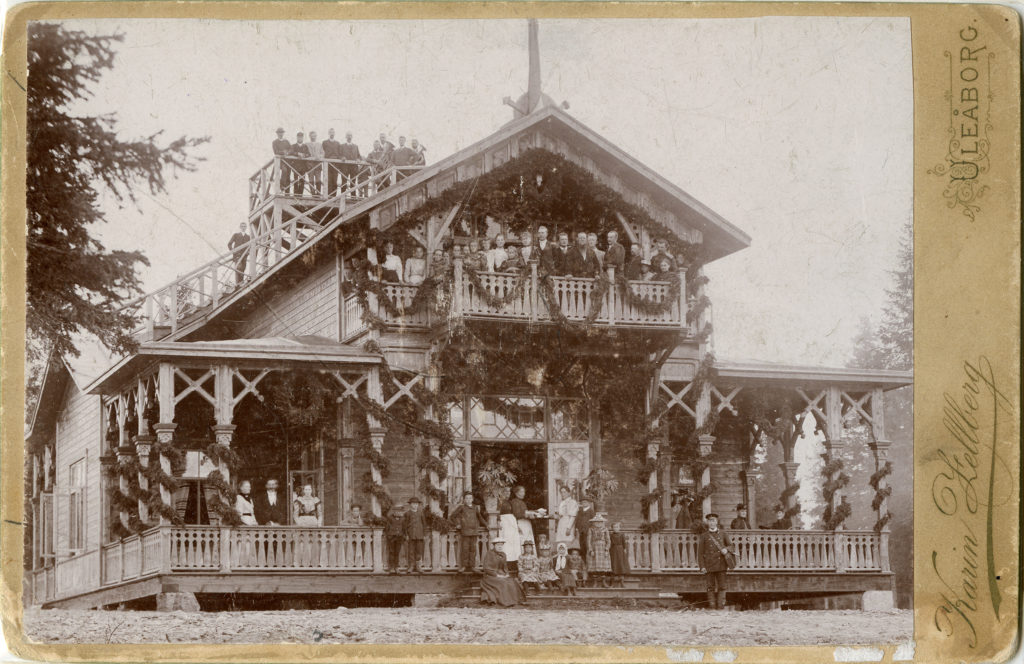 A few steps up the nearby park, Meripuisto (lit: sea park) and we can find more examples of buildings from the earlier times. There is a 1796 built smoke hut, which is open during summer, and Puistopaviljonki, a pavilion-like house that is also known as the old courtroom. Designed by architect Waldemar Wilenius the 1893 built Puistopaviljonki functioned first as a club. Over the following decades the city administration departments occupied it, right until 1992 when it was restored as a restaurant, which it still is. 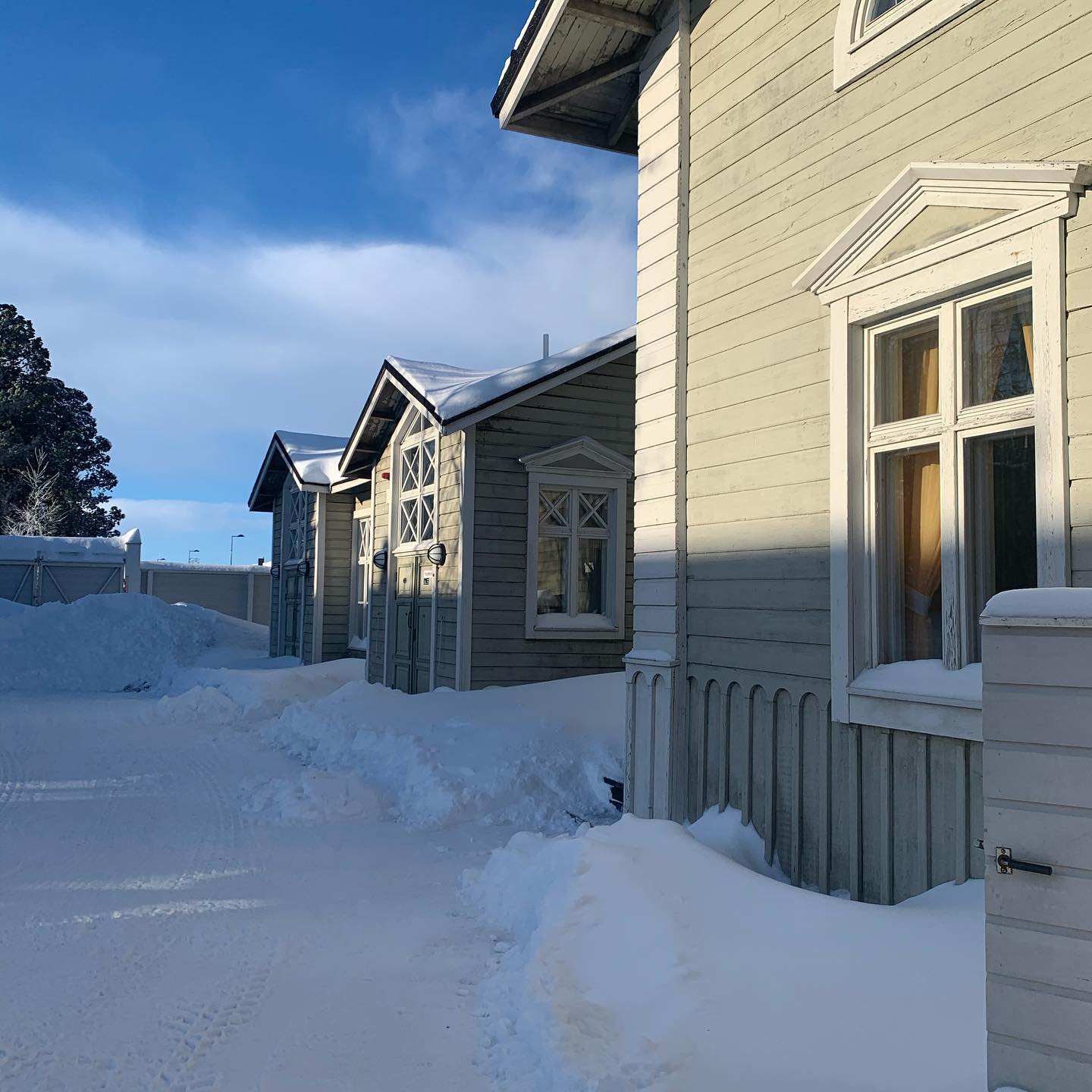 Heading down the park towards the Kauppakatu (lit: trade street) we can step into a charming courtyard of Jänkälä. Sawmill manager Pekka Tuhkanen had it built in 1875 as an inexpensive inn. In 1920 consul Joel Jänkälä restored the houses for his family. The main building still retains many elements of the world gone by. Nowadays the Jänkälä is the centre of the Green and Sustainable Kemi –program.

As we walk along the Kauppakatu we pass the local central hospital complex built in the style of functionalism. Hospital begun operating here in 1941. The  original Uno Ullberg designed building has undergone many extensions, the latest of which is currently going on. 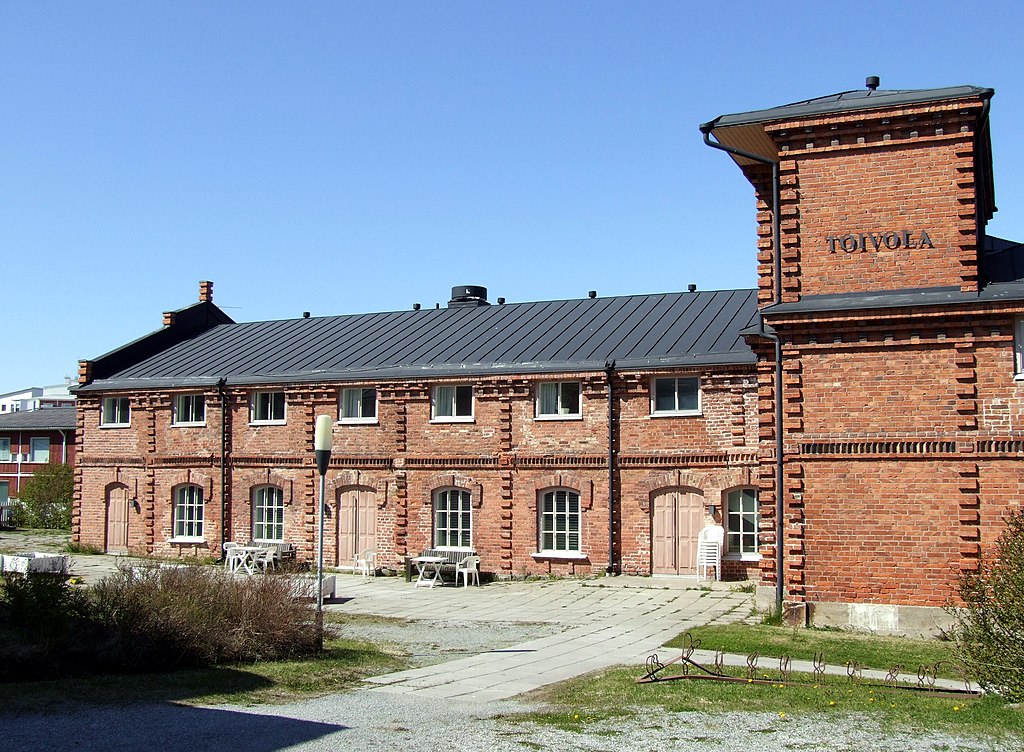 When we have a look towards Sankarikatu we notice a red bricked building on the right, called Leipätehdas (lit: bread factory.) Initially it was built as a flour mill manufacturing in 1890’s. Today it is the city of Kemi’s day centre for people with disabilities. 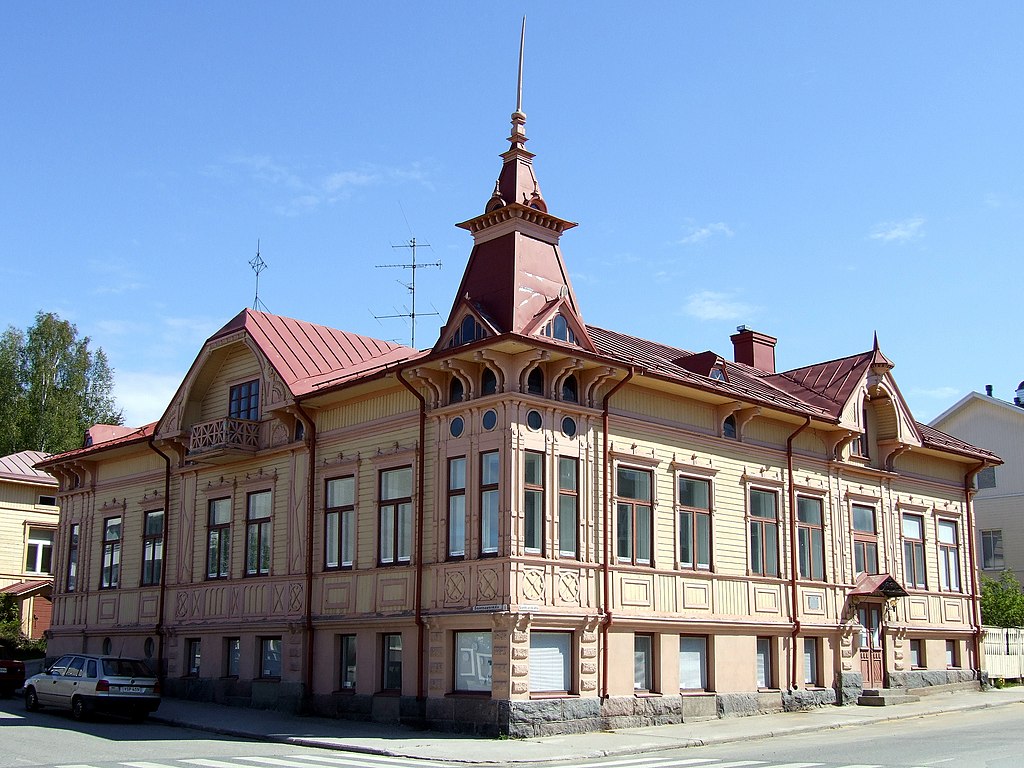 Staying put for a moment, we can marvel the beautiful building across from the Leipätehdas. Designed by the builder of the Kemi Lutheran Church, J.V. Lehtinen it was completed in 1901 for banker Frans Junnelius (1850-1916) and his family. Today the house – still known as Junnelius House – is privately owned.

Heading back to the Kauppakatu we carry on towards the downtown. Decades have naturally altered the scenery here, but Kemin Pirtti stands out from the surrounding buildings. This splendid redbrick building celebrated its inauguration in October 1927. The building can boast with one peculiar feature; it had water pipes before there were any water supply network installed in the city. Nowadays the Kemin Pirtti functions as one of the venues for the Kemi Town Theater plays. 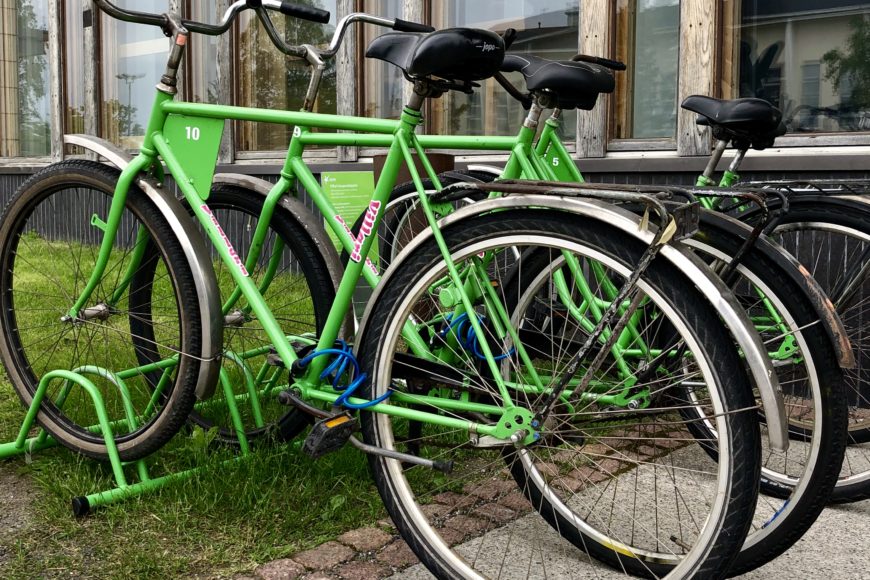 Do you think our tour feels a bit too long for walking? Let’s rent bikes? The city of Kemi has these bright green bikes available to rent at the following places:

And, while we are on the roll, how about extending this tour to our all year round beautiful nature trails? Okay, perhaps next time. Though one can always plan ahead, so have a look at what we have. 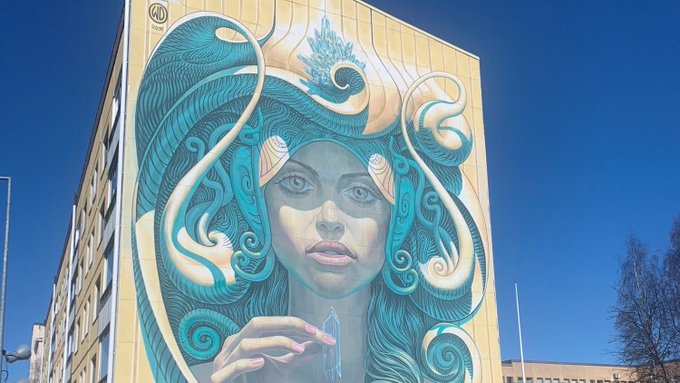