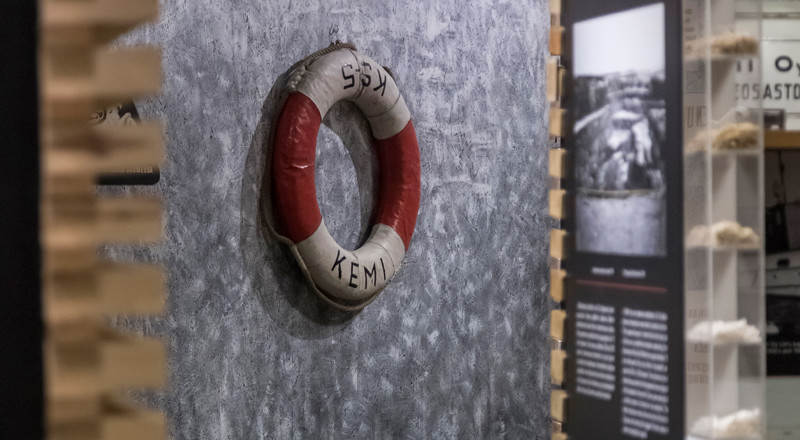 The City of Sea and River – Main Exhibition

The Main Exhibition addresses the history of Kemi and its neighbouring areas as well as the influence the sea and the river have had on the formation of the culture, trade and wood industry of the area. The exhibition includes 10 main themes and several sub themes.

The archaeology in the exhibition tells tales of the way of life thousands of years ago all the way up to the founding of the city. The wood and paper industry is showcased from the point of view of both the labor housing and the factories and sawmills starting from the 1800s and leading up to the modern times. On the ”Business Street” of the exhibition you can explore for example a police station, 1950s to 60s hair salon, paint and wallpaper store, as well as information on other service trades and persons of interest of Kemi. The Lapland War and battles in Kemi recount the effects the war had on the people of Kemi. The River Kemijoki is presented as a thoroughfare through log floating and fishing. In the harbor section it is possible to get to know about the history of the sea and seafaring.

The exhibition includes 15 touch screens that provide more comprehensive information on the themes. The narratives of the exhibition are in Finnish and English but through QR codes they open up also in Swedish, German and Russian.